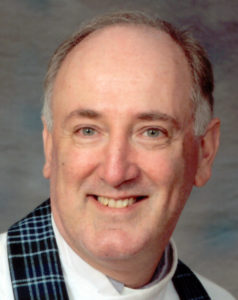 A few facts about me: I was born in Hamilton and raised in Westdale.  I received my undergraduate and Master’s degrees at McMaster University and then my doctorate in English at the University of Toronto.  I spent many years as a pastoral musician, most of them as the Director of Music at Westdale United Church.  After discerning a call to ordained ministry, I received my M. Div. from Emmanuel College and, following ordination, served congregations in St. Catharines and Hamilton, along the way completing my specialist training in Interim Ministry.  In 2018, I graduated once again from Emmanuel with a Th.D in church history. My primary area of research has been the United Church and my dissertation explored our denomination’s response to the fascinating, but troubled decade of the 1960s.  During times of relaxation, I still continue to delight in reading (with a secret passion for detective fiction).  Most of my musical participation of late has been as an appreciative listener with a particular affection for choral music.  Like the rest of my birth family I’ve been known to eat with perhaps unseemly enthusiasm.

Lianne has been our Music Director and Organist since 1997. 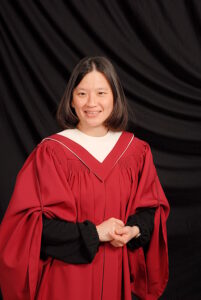 She accompanies our worship music on organ, piano, and other instruments, and conducts the 15 voice senior choir, which has recorded and released two CDs, and participates in community concerts annually.  In recent years, the choir has enjoyed collaborating in worship at West Plains with groups such as the Metropolitan Silver Band, Linnea Good and David Jonsson, Sound Stage Niagara, and Infinitely More.  In addition to the choir, Lianne leads the Men of West Plains as they sing annually on Christian Family Sunday (Mother’s Day).   Lianne curates and promotes the Live!@West Plains concert series, presenting several concerts each season.  In 2008, Lianne worked with church members and friends to produce an awesome production of Joseph and the Amazing Technicolour Dreamcoat, with cast members drawn from the woodwork of the West Plains family.  The shows were a great success!

Lianne graduated from McMaster University with a Master of Engineering degree.  She worked in the pioneering field of digital radiography at McMaster Medical Centre before beginning her career as a science teacher at Appleby College in Oakville, where from 1998-2018 she served as chapel organist for daily services and for special occasions, including visits by HRH Duke of York and renowned Inuit artist Kenojuak.  Lianne was the collaborative pianist and organist for the Appleby College Chapel Choir, and she accompanied the Cantus Chamber Choir on performance tours to Italy, France and New York City.  In April 2013, Lianne performed with Cantus on the Stern Auditorium/Perelman Stage at Carnegie Hall.  Lianne has loved and sung choral music since youth, counting as valuable training her time singing with the Trinity College Chapel Choir, Georgian Bay Youth Chorus, the Hamilton Children’s Choir, Vox Nouveau, McMaster University Choir, the John Laing Singers and the Burlington Civic Chorale.  Recently, she has sung on cathedral choir residencies in England, including at Canterbury Cathedral, St. Alban’s Cathedral, Southwark Cathedral, and Westminster Abbey.

Lianne began piano studies at an early age, and took up the organ in high school, when she joined the Binkley United Church choir in Hamilton, under the mentorship of Dr. William Renwick.  Subsequently, after a short time of organ study with Dr. John Tuttle,  Lianne earned the Diploma of Colleague of the Royal Canadian College of Organists (CRCCO).  She has been active as a church organist in the Greater Hamilton and Halton area ever since.  Lianne holds the ARCT diploma in piano performance from the Royal Conservatory of Music, and the Diploma in Lay Ministry from Wycliffe College at the University of Toronto.  She served as President of the Royal Canadian College of Organists, Hamilton Centre, from 2001-2003 and remains actively involved in the RCCO’s mission to promote the organ and its music.  She is a Life Member of the Hymn Society of the US and Canada, and a past Governor of the Board of Canada’s Summer Institute of Church Music.  Lianne received the Order of Niagara from the Anglican Bishop of the Diocese of Niagara in 2012, for her services to church music.  She enjoys cantoring for Taizé services at St. Aidan’s Anglican Church in Oakville.  Since retiring from school teaching in 2018, Lianne has joined the ‘cello section of the Dundas Valley Orchestra, and currently serves on its Board of Directors.  Lianne is also a collaborative pianist with the Oakville Choir for Children and Youth, with whom she performed as guest organist at Roy Thomson Hall in 2019.

Lianne had the once in a lifetime privilege of contributing to the process leading up to the installation of the new three-manual Casavant pipe organ at Appleby College in 2003, and to the procurement of the Yamaha GC-1 grand piano at West Plains.  She continues to have the pleasure of consulting with West Plains member, Neil Shaw of Shaw Organs, on the delightful Shaw electronic organ Opus 28 at West Plains.

We are so blessed with Lianne’s amazing musical gifts and her wonderful personality at West Plains.

To contact our music director, Lianne, send a message to:  info@westplains.ca